Meet the Vosloorus Siko twins, Owami and Olwethu. They rose to fame after marrying the same man, Mzukiseni Mzazi, when they were both 21 years old. However, in the year 2022, they have divorced the man and are now alone and living in different circumstances. This article contains information on their background, age, net worth, reality show, and other topics.

The Siko twins could not be more dissimilar, yet they are the same. Olwethi is more reserved and introverted, but Owami is outgoing and energetic. Even by their voices, it’s tough to tell them apart. They originally made headlines in 2011 when they married the same man when they were both 21 years old and the man was in his forties. But how did this come to be? This post will tell you all about it and much more.

Twins, identical or fraternal, generally share a unique relationship and bond. This is no different for fraternal twins. Owami and Olwethu Siko are 31 years old as of 2022. 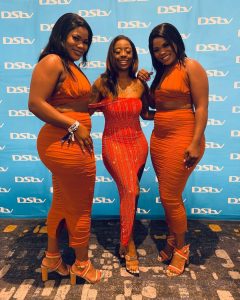 Owami and Olwethu Siko were born and raised in Vosloorus, and were raised by their destitute grandmother. As a result, they were unable to purchase basic necessities such as sanitary towels. Despite all of this, they grew up to be really close.

The sisters gravitated more and more towards each other as a result of their difficult childhood and upbringing, forming a strong bond that led them to marry the same man at the age of 21.

The twins decided to leave home when they turned 21 and seek brighter pastures. They opted to pursue a career in performing, which was their love, as talented actresses. They met their ex-husband, TV director Mzukiseni Mzazi, in their pursuit of their aspirations.

But how did they meet and marry in the first place? They asked Mzukiseni to be their instructor because they couldn’t afford to be educated as actresses. He trained them, but he warned them that unless they were his, he would stop supporting them.

They were naive, and they saw it as an opportunity to make it in life. Left with no other option, the twins agreed to marry the older man who could pass as their father. A few months later, they were married to Mzukiseni in 2011 in a traditional ceremony widely covered in blogs and magazines.

Things started to go wrong three months into their marriage. After telling them he was divorced, they discovered he was still married and had many children with other women.

At the slightest provocation, the husband became physically abusive. He attempted to set fire to their home at one time. He splashed diesel all over the place, but there were no matches. That’s how they managed to stay alive. Otherwise, they would have died a long time ago! They left their marriage with two 7-year-old girls.

Despite the fact that they each have a daughter, they regret their hasty marriages. The twins’ grandmother, who is now 70 years old and still lives in Vosloorus, was relieved to learn about the divorce because she didn’t want her granddaughters to be stuck in a bad marriage.

They say they do not believe their husband ever loved them. Instead, he married them because they were virgins, and he was doing it to brag about being married to twins. Similarly, they also never loved him. They only agreed to his hand in marriage as they wanted to escape poverty.

They returned to the public glare with their new reality TV series, Twice as Bold, after being out of the spotlight for more than a decade. The 31-year-old twin sisters’ lives are chronicled in this 13-episode series.

In the series, they have shared the struggles they have gone through in their 9-year marriage, journey to motherhood, spirituality, navigating family relationships and love.

What next for the twins

The girls envisage themselves as wealthy entrepreneurs who will walk down the aisle in their white wedding gowns in addition to presenting the reality TV show.

They are looking forward to wearing a white wedding gown this time, as their first wedding was a traditional affair. They’re also encouraging young ladies from difficult backgrounds to avoid marrying for the wrong reasons.