Thembi Seete (born 25 March 1977) is a South African broadcaster, actress, and musician. She is famous for being a band member of the defunct band Boom Shaka.

She is also active in other fields in the entertainment industry both in Music and Drama. She can efficiently do both.

Thembi Seete was born on March 25, 1977, in Soweto, a township of the City of Johannesburg in Gauteng. She is beautiful, hardworking, and intelligent. This has made many women both in South Africa and beyond admire her. 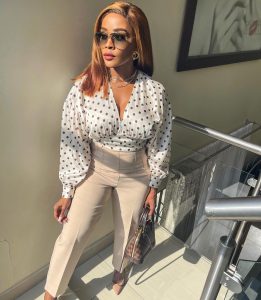 Her angelic voice has gained her a firm ground in the South African entertainment circle. She was a notable member of the now-defunct group Boom Shaka.

The Kwaito group lasted for 6 years, it was founded in 1994, and 2000, it ceased to function. She was an active member of the musical band until it was disbanded.

Thembi embarked on a solo career and has also gained ground. She has dropped several hits and songs loved by music lovers in the country.

After gaining ground in the music industry, Thembi had to diversify. She tried out other careers in line with the entertainment industry. She did acting and then tried out hosting programs on radio.

She is multi-talented which has helped her to attain prominent heights. Thembi landed her debut role as an actress after appearing in the film series titled Hijack Stories.

She played a short role in the film but left an impact that gained her another spot. She made it as a cast in the popular Mzansi drama series on SABC1 titled Yizo Yizo. More opportunities followed including performing Sure Ntombazana on the Yizo Yizo 2 soundtrack.

She has since then established herself in the entertainment industry. Thembi is a popular figure and has been in the industry for a while. She appeared in the Gaz’lam in 2000 as Lerato.

Thembi continued to play the role in the SABC1 aired TV series for 4 years. She landed the role of Lily in the third episode of the SABC1 drama series, Mtunzini.com Seete was cast as a guest star at the beginning of Ghosts of the Pasts Season 2.

The Nation, a prestigious website, gathered that she landed another television role in an SABC1 Soccer Drama series titled Zone 14. She was cast as Nina Moloi, a lead role, and appeared from season one -four.

She landed another role in Bongi in one of the most popular shows on e.tv titled Rhythm City in 2015. She had also tried out presenting and has hosted the show Jika Majika, Nguwe Na? She is the host of the Crown Gospel Music Awards Edition 6.

She was engaged to her fiancée Bobo ‘Bo’ Seritsane. The couple later climbed a ladder in their love life after being together for 10 years. The love they had for each other is immeasurable.

In 2012, her boyfriend Bobo asked her to marry him and she accepted his proposal. The proposal made headlines and then many anticipated when they will get married.

A turn of events happened, they called off the engagement and separated. Many were anxiously expecting an explanation from Thembi. Thembi Seete has found love again and is dating a businessperson Collen Mashawana. She is a mother and the name of her child is Dakalo.

The actress is active across several social media platforms. She uses the platform to share moments with her fans. On her Instagram profile, she has over 2.8 million followers.

She doesn’t have a Twitter account. Thembi is also among the Judges of Idol SA. On February 16, 2022, she shared a picture with three other Judges of the show.

Thembi is a notable personality in South Africa and has amassed much wealth. According to The Nation, she has an estimated net worth of $750,000.