For the past few days, social media users around the country have been delving into the personal affairs of businessman and tycoon Edwin Sodi, who has been a trending subject.

“Who is Edwin Sodi?” is a very essential question that many people may have on their minds.

The billionaire is also noted for his large gifts to politicians, some of whom are his buddies, particularly those in the African National Congress (ANC).

Sodi has made a name for himself as a successful businessman, but he is also renowned for a couple of unsuccessful romances with high-profile ladies.

Edwin and Nthateng Lerata, a former television and radio broadcaster, married in 2012 in a traditional wedding ceremony attended by their closest friends and family.

Their marriage did not last long, as Sodi sued Lerata for stealing R1 million from the safe in their bedroom a few years later.

After that, the entrepreneur began dating DJ Sbu’s ex-wife and baby mama, Disebo Makatsa. During that time, Edwin made headlines as he was accused of destroying DJ Sbu’s marriage.

Edwin broke their relationship in 2019, after a few years together, leaving her in shambles, since she had ended her marriage to be with him.

The compassionate tycoon wasted no time in finding new love, as he quickly entered a new romance with Kefilwe Mabote, a social media personality and socialite.

The couple dated for two years before calling it quits just as they were making headlines for all the wrong reasons.

Sodi’s penchant for romantic or transactional relationships with popular figures does not stop with Mabote; he is also said to be dating social media influencer and content creator Mihlali Ndamase.

Musa Khawula, a celebrity gossip writer, recently uploaded a photo on Twitter of Mihlali snapping mirror photos from Sodi’s home and posting them to her personal account.

Earlier that day, Khawula shared a post of “Edwin Sodi’s hit list”, which is a list he put together of the women which Sodi has allegedly had relations with, with television personality and DJ Thuli Phongolo being one of the women on the list. 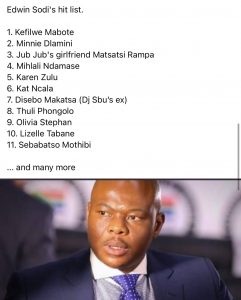 Edwin has since been trending until now , here are some of the tweets from mzansi:

“Kanti Minnie Dlamini chote with Edwin Sodi💀 Were his accounts not frozen kanti after that corruption scandal?”

“Edwin sodi has crippled men who claim and to be handsome and sexy😂😂 a legend that man must be stopped, Mihlali is also on the hit list 😂🙀”